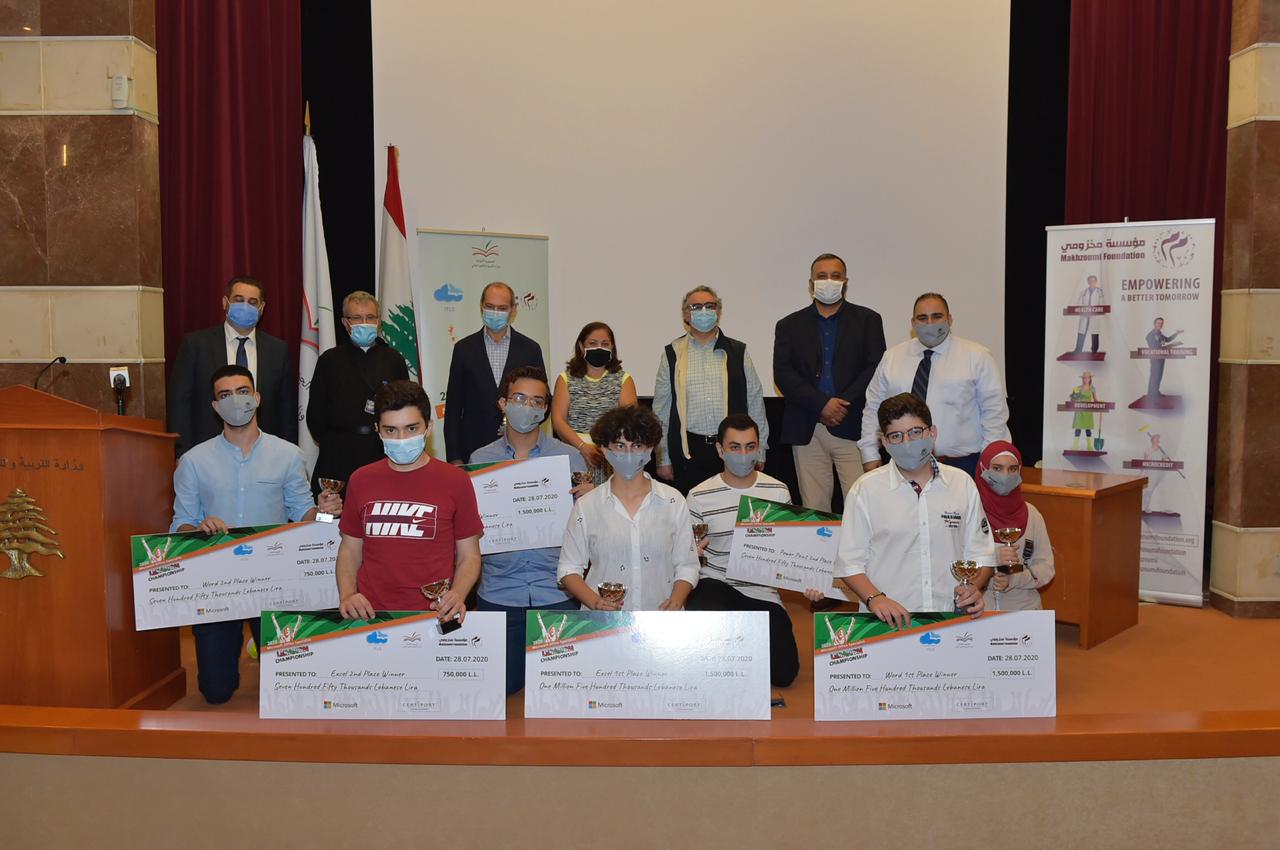 The activities of the Lebanon Microsoft Skills Championship for the current year 2020 were concluded, in partnership between Makhzoumi Foundation and ITLS- Information Technology Leading Services, under the auspices of the Ministry of Education and Higher Education, in which 27 private and official educational edifices participated in Lebanon… 2151 exams were conducted, in which 1027 students were able to obtain a certificate from Microsoft, while 53 competitors competed in the finals.

The names of the winners of the local Microsoft Skills Championship were announced at the Ministry of Education and Higher Education, taking into account the current situation the world is going through, through commitment to social distancing, wearing masks and shortening direct physical contact, in the presence of the Director General of the Ministry of Education and Higher Education Dr. Fadi Yarak, President of Makhzoumi Foundation Mrs. May Makhzoumi, Secretary General of Catholic Schools Father Boutros Azar, Director of Educational Marketing at Microsoft in the Middle East and Africa, Mr. Ali Harakeh, Representative of Certiport in Lebanon and CEO of ITLS, Mr. Tarek Basha, Director General of Makhzoumi Foundation Mr. Samer Al-Safah, and Director of the Vocational Training Program at Makhzoumi Foundation Mrs. Malak El Hout, the winners, and representatives of the participating schools and universities.

This coronation came after tests were conducted for the students participating at Makhzoumi Foundation Center, with the utmost prevention measures taken, to ensure the safety of students and supervisors, and to ensure the continuation of the competition.

Basha: Despite all the circumstances, the competition continued

ITLS CEO Tarek Basha thanked the participants and supporters of the tournament, who continued their efforts despite the difficult circumstances we are going through, and talked about methods of coping with the crisis by using remote communication means to prepare and follow up the competition. Basha then thanked Makhzoumi Foundation for its support, the participating students and schools, and the team supervising the tournament.

Harakeh: the importance of technology to meet all emergency conditions

For his part, Director of Educational Marketing at Microsoft in the Middle East and Africa, Mr. Ali Harakeh, spoke on behalf of Microsoft, thanking the Ministry of Education, Makhzoumi Foundation, ITLS and the participating schools, noting that the competition will continue for the third year in a row despite all circumstances. Harakeh also spoke about the importance of technology to face all emergency conditions, which was evident during the outbreak of the Coronavirus.

In turn, Mrs. May Makhzoumi, President of Makhzoumi Foundation, considered that this competition constituted a great challenge this year, and the motives for participation were greater, competition was stronger and grades were close. Makhzoumi congratulated the participants in general, and the female participants in particular, stressing the need to empower women. Makhzoumi talked about the link between this competition and our current reality and our future, which is heading to change traditional educational methods, to rely on technology.

Yarak: This competition promotes a culture of creativity

Prizes were received for the participants as follows:

In conclusion, Mrs. May Makhzoumi, President of Makhzoumi Foundation, presented the championship trophy to the Ministry of Education, represented by its Director General, Dr. Fadi Yarak, in appreciation of the Ministry’s continuous support.