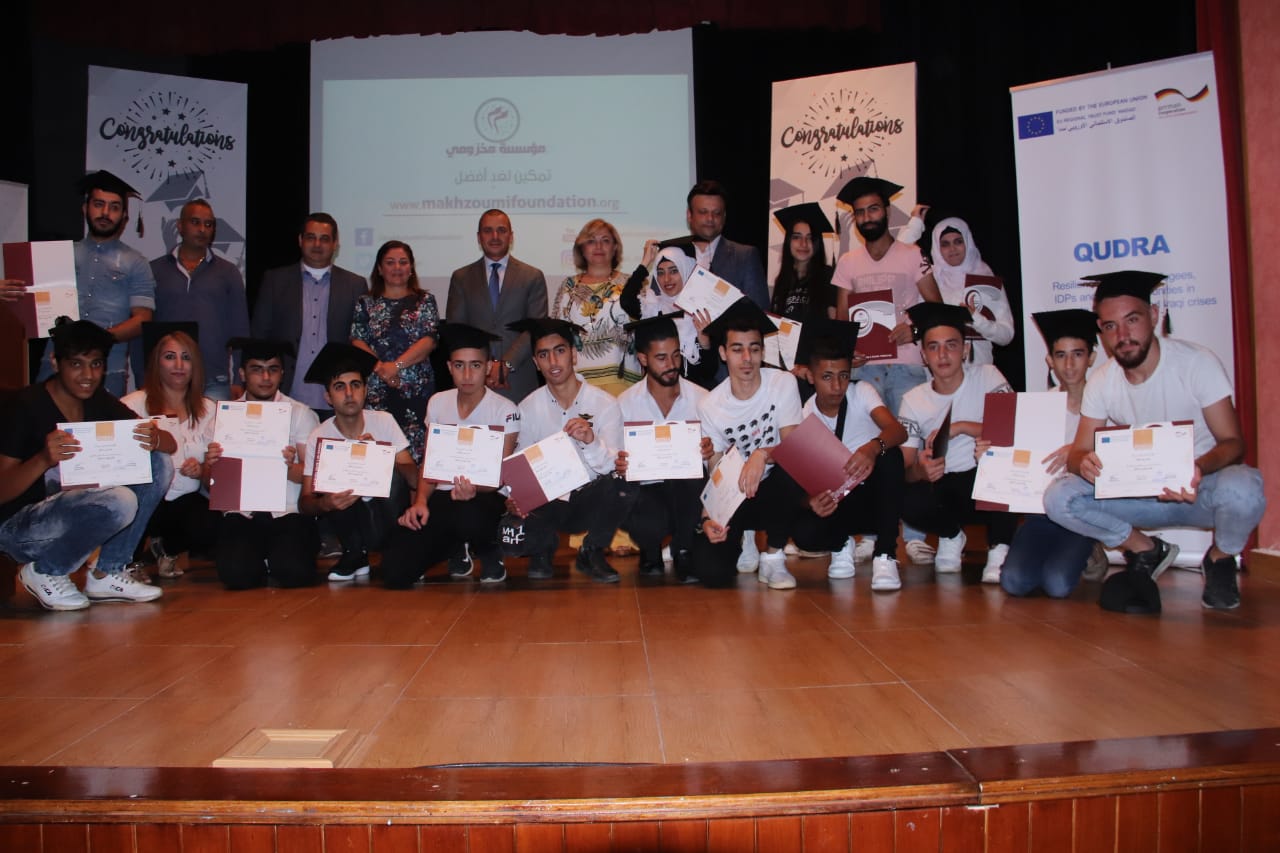 Makhzoumi Foundation celebrated the graduation of 300 students from different regions of Lebanon, after completing vocational training courses on tiling, wall painting and wallpaper installation, which was organized by the Foundation in cooperation with GIZ, funded by the European Union, Madad Fund, within the QUDRA project. The Foundation held a closing ceremony at the Center for Child and Mother Care in Beirut on 5 August 2019 to graduate about 100 students from the districts of Beirut and Mount Lebanon.

The ceremony was attended by the President of Makhzoumi Foundation, Mrs. May Makhzoumi, the General manager of the Foundation, Mr. Samer Al-Safah, the directors of the Foundation’s programs, as well as the representatives of the partners, the Director of Jamil Al Rawas Secondary School for Boys, Mr. Mazen Al-Taweel, and the owner of Memo Eng. Mazen Shabaro, professors, trainers, students and their parents.

In her speech, the President of Makhzoumi Foundation Mrs. May Makhzoumi congratulated the students who completed the training, commending their efforts. Makhzoumi stressed the importance of such training courses because they provide work for young people and enable them to create their own opportunities. Makhzoumi praised the participation of young women in training courses that were considered to be exclusive to males, stressing that the women’s touch on these professions gives them a distinct aesthetic artistic character.

Students’ representative Gael Hamadeh spoke on behalf of her colleagues and thanked Makhzoumi Foundation and GIZ for this opportunity. “This course gave us the opportunity to discover many things that we did not expect to learn, such as space science and tiling techniques, and more importantly, this is not necessarily a male domain,” she added.

These courses aim to train young talent and help them in the first step in the labor market, especially with the economic recession and high unemployment, and the challenge faced by young people in finding jobs, a model integrated step to enable young people to build their future, implemented by Makhzoumi Foundation in cooperation with several international organizations.

After the speeches, a video report on the courses held in various Lebanese regions was presented, followed by the distribution of certificates of completion of the course to the participants.