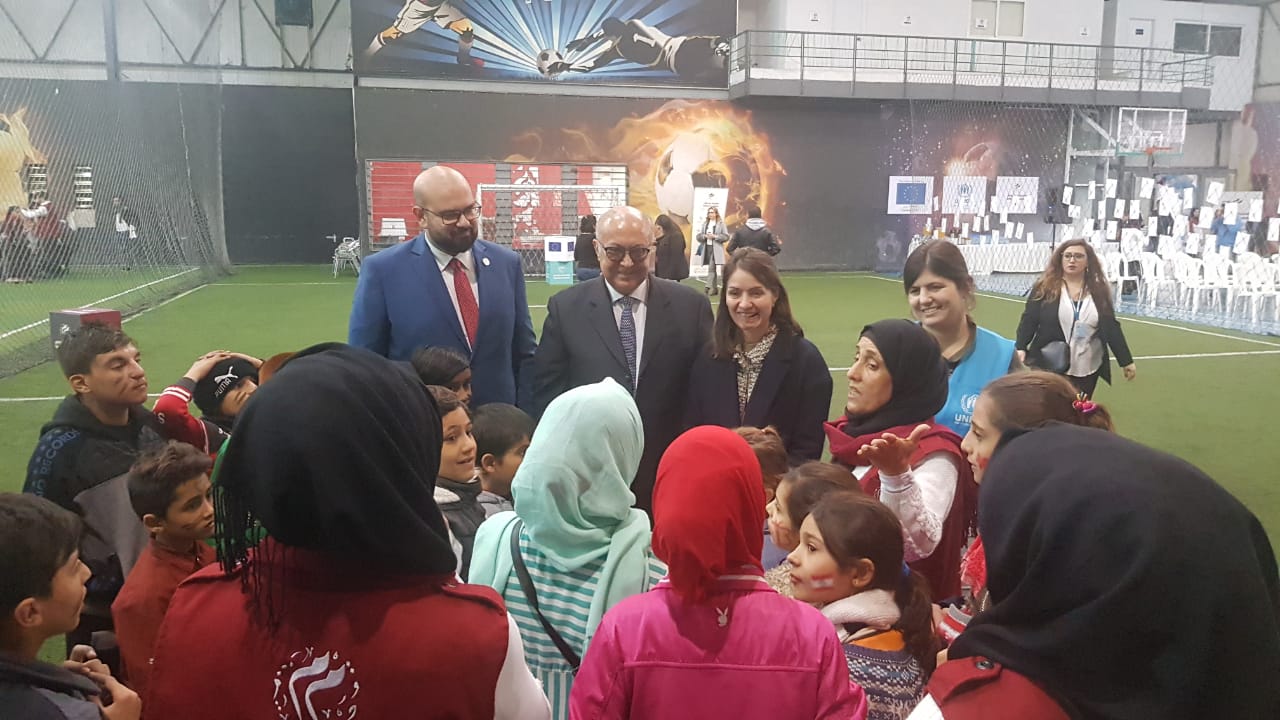 Makhzoumi Foundation, in partnership with UNHCR, the UN Refugee Agency, and with generous funding from the European Union (EU), launched the “Fun Bus” project in line with the priorities set out in the National Plan of the Ministry of Labor, and the National Steering Committee for the Elimination of the Worst Forms of Child Labor in Lebanon.

An inauguration event was held in Sports Ville, Beirut Sekyit al Janzir. The ceremony was attended by Honorary President of the Makhzoumi Foundation, H.E. Fouad Makhzoumi, the European Union Ambassador in Lebanon, Christina Lassen, the UNHCR Representative in Lebanon Mireille Girard, Makhzoumi Foundation’s President May Makhzoumi, and representatives of Municipality of Beirut, commander of the Raoucheh faction Walid al-Masri, representing the Beirut police chief, Brigadier General Mohammed al-Ayoubi, representatives of the Ministry of Social Affairs, and local and international NGOs.

The activities provided on the Fun Bus include literacy courses, education, community training, vocational training for youth between 15 and 17 years of age, social follow-up, case management, and the provision of material and in-kind assistance.

The main objectives of the Fun Bus activities are to reduce the working hours of children, with the ultimate goal of completely preventing street work, and raise awareness about the risks they could face. The project aims to enable children to read and write through literacy sessions, in addition to providing life skill sessions for parents and youth to enable them to learn new skills. The project also seeks to reduce psychological stress through psychosocial support sessions.

Speeches delivered at the inauguration

After the national Lebanese anthem and welcoming of guests, Makhzoumi Foundation’s President May Makhzoumi gave a speech about the importance of partnership in achieving common goals, speaking about the phenomenon of child labor globally and locally. Makhzoumi stressed that the street is no place for children, and that this initiative targets street children. The children are taught how to prevent attempts of harm, and how to bring joy to their hearts through play; revealing that 150 children have been brought to school after undergoing literacy courses.

For her part, UNHCR’s Representative in Lebanon, Mireille Girard, stressed that “safeguarding the rights of children and meeting their protection needs is of the utmost priority for UNHCR and our partners”. Girard thanked the European Union for their support, the Makhzoumi Foundation for creating this project and their efforts in implementing it, the Governor of Beirut, the Municipality of Beirut, the Ministries of Social Affairs and Interior, and the security forces for their cooperation.

In turn, European Union Ambassador in Lebanon, Christina Lassen, thanked all those who contributed to the success of this project. Lassen continued by saying that “the European Union has been working closely with the authorities, UNHCR and civil society actors, like the Makhzoumi Foundation, to test the mobile unit “Fun Bus”, to support children who live and work on the streets with non-formal education and rehabilitation. The European Union believes that the rights of all children must be protected. It is therefore our duty to join efforts to develop stronger protection mechanisms for children.”