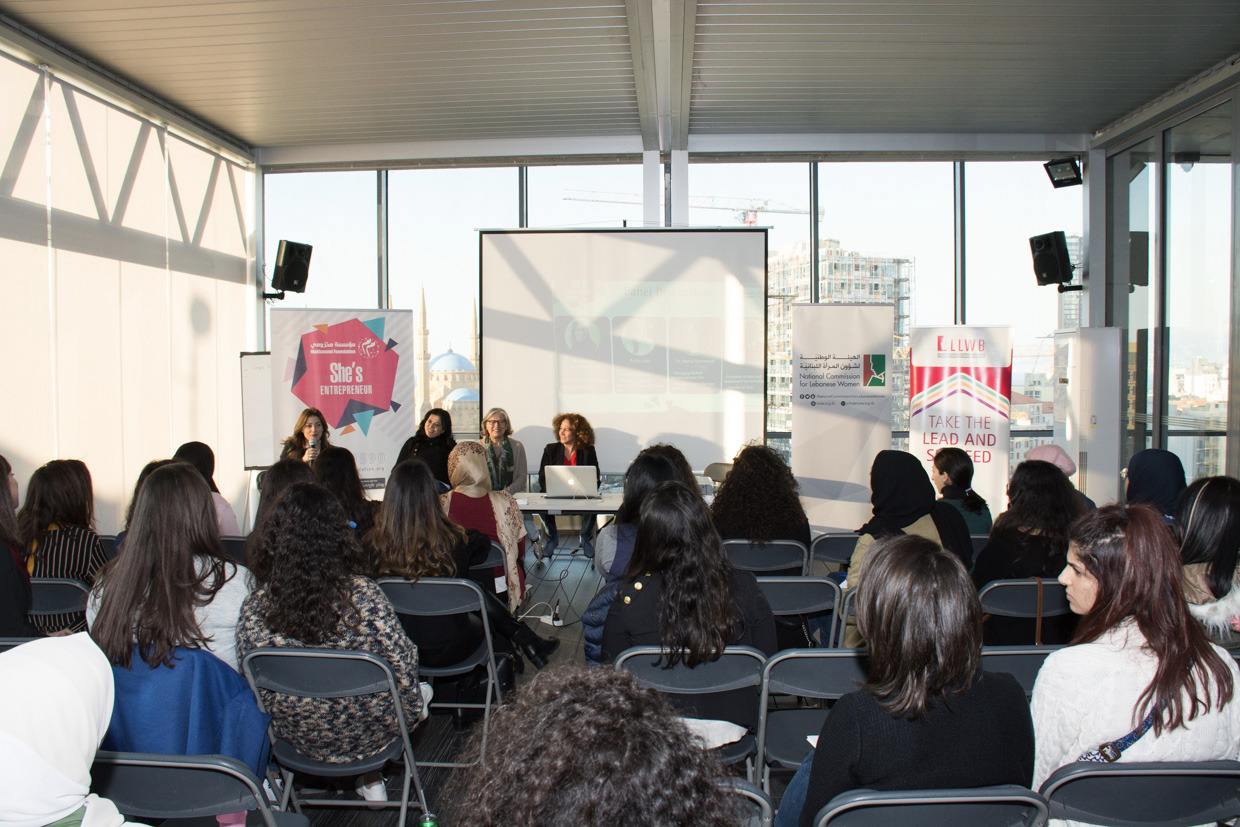 On the occasion of International Women’s Day, and in line with its the permanent pursuit of women’s empowerment, Makhzoumi Foundation launched “She’s Entrepreneur” Forum for the second consecutive year, in collaboration with the Beirut Digital District, the Lebanese League for Women in Business LLWB, and the National Commission for Lebanese Women, On March 9, at the BDD Center, in the presence of the president of Makhzoumi Foundation Mrs. May Makhzoumi, the foundation’s General manager Mr. Samer Al-Safah, and the foundation’s program managers, along with several leading businesswomen and a group of interested people.

“She’s Entrepreneur” Forum aims to promote the participation of women in the business sector and encourage them, by hosting successful women to talk about their experiences, and by training the participants and teaching them the basics of successful business and how to develop it.

At the opening session, Mrs. Makhzoumi spoke about her experience in the labor market and in institutional work. Mrs. Makhzoumi said that at the moment, the idea of women entering the business field is easier than before, recalling the beginning of her previous work, where the idea of a woman in administrative status was surprising.

As for the support of women in the business field, Makhzoumi assured that 70% of the beneficiaries of microcredit program at Makhzoumi Foundation are women, and that the foundation places at the top of its priorities the support and empowerment of women in the labor market, whether through small loans that help them launch their own projects or through their preparation to promote their own business through multiple workshops.

When asked about her work at Makhzoumi Foundation and its excellence locally and internationally, Makhzoumi stressed that the Foundation’s vision is based on empowering Lebanese citizens at various levels, empowering women, and implementing the sustainable development goals and 2030 Vision. These goals locally serve and help the Lebanese citizen, and internationally converge with the objectives of a number of organizations. Mrs. Makhzoumi spoke of the difficulties faced by the Foundation’s first period. The first challenge was to convince women to attend training courses, as their husbands did not accept it then, but the chances of women learning and working now are better.

Mrs. Makhzoumi also confirmed that through her membership in the National Commission for Lebanese Women, she cooperates with the members of the commission to increase the number of women working in public affairs, providing examples of successful women in the business field and public affairs.

At the end of her speech, Mrs. Makhzoumi advised the attendees to develop themselves and work to prove their eligibility, because they have extraordinary abilities.

After the opening session, participants attended a number of training courses and lectures on Entrepreneurship and Small Business, and how to launch and develop them. These courses and lectures were given by trainers Zeina Maalouf, Samar Makhoul, Chantal Abu Jaoude, Robert Gemayel and Claudette Salameh.

A panel discussion on entrepreneurship and women in the workplace was held at the end. The Panel was constituted of the president of the Lebanese League for Women in Business Asma Al-Zein, the administrative partner at Hammoud Law Firm Hania Hammoud, the owner of the Mayrig restaurant Aline Kamakian, and the media advisor and producer Youmna Naofal as a moderator. At the end of the seminar, certificates were distributed to the participating women.